It’s easy to feel like there are so many new diets out there that you can’t even keep track of them all. Just when you’ve finally got one diet figured out, the entire world decides to jump ship and move onto the next popular one. And by the time you understand that one, people have moved on again. Wouldn’t it be great if there was a simple, no-fuss explanation for the popular diets out there today, in non-scientific terms that everyone can understand?

We think so, too! To help you understand what’s got people in the dieting world excited, we will walk you through two of today’s most popular dietary choices — the Paleo diet and the Keto diet. We’ll talk about similarities, differences and recipes that can work well for each diet. Remember to consult your doctor before starting any diet!

What Is the Paleo Diet?

If you have even the slightest interest in the world of food, health and dieting, you’ve probably heard of the Paleo diet. Although you may not be certain what it is, the name probably sounds familiar. But what exactly does Paleo mean, and what is the rationale behind it?

The concept of the Paleo diet is pretty simple. The idea is that we, as a species, regularly eat lots of food and food groups that our bodies were never built to digest. Our bodies have adapted over time to handle several of these foods, but doing so has led to various health conditions and the overall breakdown of our natural health.

The solution offered by the Paleolithic or Paleo diet is that we would be better off if we ate the same types of foods as our ancient hunter-gatherer ancestors. For this reason, you may also hear this diet referred to either mockingly or affectionately as the “Caveman Diet.” This is also where the diet derives its name, in reference to the Paleolithic era of pre-history.

An excellent way to summarize the Paleo diet would be to say that its primary goal is achieving digestive health through the elimination of food groups that are hard for our bodies to digest. This makes the Paleo an excellent choice for anyone, but in particular for people looking for help in the following areas:

Aside from these major areas, the Paleo diet may also be an excellent choice for someone with food allergies and areas that they’re trying to avoid due to digestive concerns. By looking to the Paleo diet for guidance, such a person might learn tips for how to create a sustainable lifestyle and diet.

What Is the Keto Diet?

The Ketogenic or Keto diet is perhaps less familiar than the Paleo diet, although many will still have heard of it. This diet is best known as a weight-loss diet, although it has numerous other health benefits as well. Those who try this diet and stick with it typically experience dramatic and speedy weight loss through the strategic portioning and planning of the diet. Sound too good to be true? Let’s look at the science.

The premise behind the Keto diet is that it helps you lose weight by essentially teaching your body how to burn fat more efficiently. This improved fat-burn is a metabolic process known as ketosis, from which the entire diet derives its name. It works like this.

Glucose is your body’s favorite form of fuel. If it is available, your body will always choose to burn this to keep you going, instead of burning fat. To achieve the desired fat-burn, you must remove glucose as a readily-available fuel source. Under these new circumstances, the body has no choice but to burn fatty acids instead. This process produces ketones and is therefore known as ketosis. The Keto diet, then, is one that seeks to achieve this effect.

To do this, dieters must heavily restrict their carb intake. Professionals recommend restricting carbs to a mere five percent of the diet while raising your fat intake to approximately 75 percent of your daily food intake. With hardly any carbs and thus no glucose to turn to, your body has no choice but to burn fat instead. This results in fat loss and eventually, weight loss.

In addition to promoting weight loss, the Keto diet has also shown to be effective at improving medical conditions such as Alzheimer’s disease and type 2 diabetes.

Now that we have a basic understanding of what these two diets are, as well as what they’re designed to help you achieve, let’s place the two side by side. How are they different? How are they similar? And which might be right for you?

Despite their different aims and methods, the two diets aren’t entirely dissimilar. In fact, there’s a great deal of overlap between the two. Whether you embark on the Paleolithic or the Ketogenic diet, you’ll find yourself needing to make these adjustments in your daily eating habits: 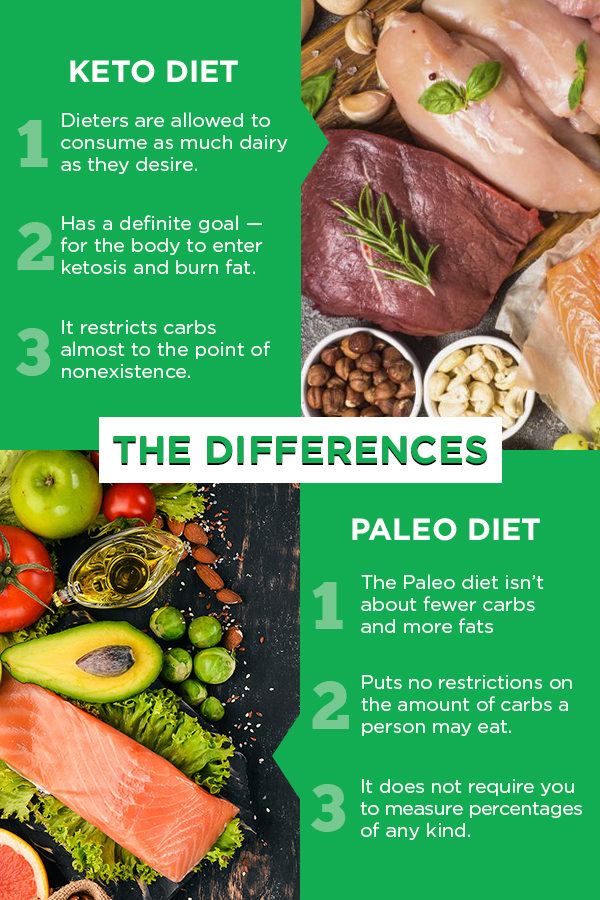 Despite these similarities, the two diets ultimately have much more differences than they do commonalities. While both diets can be great choices that lead to a healthier lifestyle as well as eventual weight loss, the methods they employ to achieve these ends are vastly different.

1. The Paleo Diet Isn’t About Fewer Carbs and More Fats

The point of the Keto diet and the entire reason it works is that it restricts carbs almost to the point of nonexistence, while simultaneously pumping up on the healthy fats. Initially, this may seem similar to the Paleo diet, which restricts grains. Since grains are where a lot of carbs are found, many people may see this as the same thing.

However, the Paleo diet puts no restrictions on the amount of carbs a person may eat. In fact, the Paleo dieter can eat as many carbs as they want. And while it’s true that grains are restricted, there are still plenty of carbs to be found in fruit, starchy vegetables and natural sweeteners, such as maple syrup and raw honey.

Because Paleo dieters will still be consuming carbs, their bodies will likely not enter ketosis and will continue to burn glucose as energy. It is entirely possible for someone following the Paleo diet to restrict their carbs to enter ketosis, but this is not necessary per the guidelines of their chosen diet.

One of the hallmarks of the Paleo diet is that it forbids almost all dairy products, although a few such as grass-fed butter or ghee may be allowed. This is because dairy is so difficult to digest and because it isn’t something our long-distant ancestors would have had access to.

The Keto diet, however, has no such restrictions. Keto dieters are allowed to consume as much dairy as they desire, provided those foods also fall within the guidelines of the keto diet. It’s worth noting that depending on which expert you consult, however, some strains of the Keto diet do discourage dairy.

If the Keto diet is to do its job effectively, the dieter must carefully break down their daily food intake into exact percentages. Traditionally, the Keto diet dictates that these percentages should be 75 percent healthy fats, 20 percent protein and 5 percent carbs. There is a little bit of leeway on those numbers, but they represent a generally accepted standard for this diet.

The Paleo diet is different and does not require you to measure percentages of any kind. As long as you are avoiding the food groups specified by the diet, that is all that’s necessary.

No specific test can prove the Paleo diet is “working.” Instead, dieters simply adapt their dietary choices and eventually begin to experience intestinal health and other benefits. But there is no specific threshold at which this diet begins to “work” and no way to test it.

The Keto diet is more specific in this way. Keto dieters can actually take tests to determine whether or not their bodies have entered ketosis. While there are multiple test methods available today, all of these methods are simply different ways of detecting ketones in the bloodstream, which is an indicator that ketosis is occurring.

5. The Keto Diet Has a Specified Outcome

The Keto diet has a definite goal — for the body to enter ketosis and burn fat. If this happens, the diet has succeeded, and vice versa.

The Paleo diet is different, however, in that its goals are more general. This diet is about achieving overall health, particularly of the digestive tract, and is about cultivating a healthier overall diet. Weight loss may and likely will occur as part of this process, but it isn’t the primary goal. As such, it’s difficult to measure if this diet has succeeded.

Which Diet Is Right for You?

It depends on what your goal is in beginning a diet in the first place, and the answer will be different for different people. If your primary goal is weight loss, then the Keto diet is more likely to provide the results you’re looking for. However, it’s important to note that this weight may return once you introduce carbs back into your diet. Nevertheless, this diet will produce weight-loss results as long as the dieter sticks to the plan.

If, on the other hand, your goal is to achieve better overall health and if you’re looking to avoid foods that frequently upset your digestive tract, then the Paleo diet will be more useful. You will still likely lose weight, and although the results are unlikely to be as dramatic as those achieved through the Keto diet, they are often more sustainable.

Recipes for Both Keto and Paleo Dieters

Once you embark on any new diet, one of the biggest challenges right away is to find recipes that taste delicious, satisfy your hunger cravings and stay within the boundaries of the diet. For both the Paleo and Keto diets, we have a handful of recipes that we think will do just that.

Lots of breakfast foods, from cereal and oatmeal to pancakes and waffles, traditionally involve lots of carbs. This can leave dieters with few options, or so they think. For those of you feeling like you have limited breakfast options, try this Avo-Sausage Egg Melt. By preparing the recipe with Premio’s traditional mild Italian sausage, you give yourself the gift of a breakfast that’s delicious, filling and perfectly in compliance with both the Keto and Paleo diets.

If avocados aren’t quite your style, why not try these yummy Premio Bacon, Egg and Sausage Cupcakes? By using the same mild Italian sausage, you’ll have a recipe that isn’t just tasty for you but also is a great way to tempt kids into a healthier breakfast choice.

Love the blazing heat that comes from jalapenos? Good news — jalapenos are absolutely permissible within both diets. To incorporate this heat into an appetizer that’s both Paleo and Keto, look no further than these Premio Sausage and Bacon Poppers.

This diet-friendly Premio Sausage Flower doesn’t just taste delicious. It’s also completely Instagram-worthy with its distinctive shape and appearance. Best of all? It only requires four simple ingredients. Grab a package of Premio’s traditional mild Italian sausage, bacon, optional shredded Mexican cheese and one large cabbage, and you’ll have everything you need for this striking dish.

Think sausage can’t be part of your new diet? Think again. Because neither diet heavily restricts the meat you’ll be allowed to eat, a few types of sausage are entirely permissible within the bounds of both the Keto and Paleo diets. One such sausage happens to be Premio’s own mild Italian sausage, which can be enjoyed plain or cooked into diet-friendly recipes such as the ones highlighted here.

Use our handy store-locator tool to find the Premio distributor closest to you and pick up a package of this tasty sausage today. For additional questions about our products, don’t hesitate to contact us and ask.